Love it or hate it, I shall write a few more posts related to my 15 years of relationship with the double bass.

One of the first necessary things to do before the performance was to transport the instrument from the school to the Theatre. For your information, yours truly was a student of a girls' school in my secondary school days. There wasn't such a thing as getting the males to help. There were a few male teachers but they were very few in comparison. However, as I looked back, it might have been a blessing in disguise. Since I figured that there isn't many males to turn to for help, I have learnt to become more self-reliant: Just do it. No rule says that carrying heavy things is only meant to be left to the males.

I remember that school buses were used to transport the double basses and many of the other Chinese instruments to Kallang Theatre. One of the challenges was to manoeuvre the double bass so that it could be carried safely up the bus.

When we reached the Kallang Theatre, the next thing to do was to proceed to the holding area. The Chinese Orchestra that I was a member of was assigned a holding area somewhere on the basement level, if my memory does not fail me. 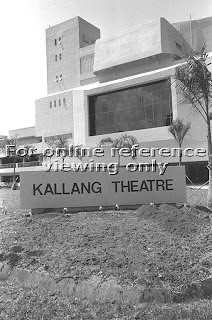 Photo Credits: Photo taken from Access to Archives, Singapore. PhotoCD Number: 19980001184, Image Number: 0034. This photo of the exterior of the Kallang Theatre was taken in year 1986.


One thing I particularly remember was the exciting times that I have had when I ventured about the various dressing rooms, the various holding areas and various other corners of the Kallang Theatre. I could do so only during the allocated waiting time, when the other performance groups were rehearsing their items on stage. It was fun. Kallang Theatre felt like a maze to me. Thankfully, my sense of direction was good enough to guide me back to the Chinese's Orchestra's holding area.

NY Nite was such a major event for the school in those days that a performer could be excused from classes. Yours truly admittedly enjoyed the privilege of taking a break from the normal routine of studying in the class-room.

The greatest challenge I would think was carrying the double bass from the holding area right up to the stage. There were many flights of stairs to take just to get to the stage. I remember the stairs were fairly narrow. I was literally walking like a crab up the stairs. Furthermore, the NY Nite in year 1992 was staged not just on one night, but on three nights. Imagine climbing up the stairs to go the stage to perform, and then walk back down again when the performance was done. At my age then, I could imagine that I was so inexperienced at the double bass that I didn't quite know how to carry it with ease.

At a time when I was so new to the double bass, what I had appreciated most about NY Nite was not having a chance to perform on stage, it was the friendship and spirit of comradeship that was forged as a result of having spent three consecutive days and nights rehearsing and performing at the Kallang Theatre.

Another unforgettable part of the NY Nite affair was the rousing cheers that many of the performers would engage themselves in after the finale of each night's performance. The power of the female teenagers' voices, screams and cheers was certainly deafening enough to make the air in the Kallang Theatre vibrate vigorously. 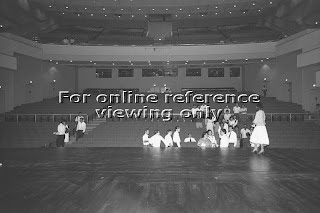 And now I know what's 'bad' being in a girls' school, no help from boys eh... hmm... we should not take the guys for granted eh...

I certainly remember Kallang Theatre for some of the performances that I saw there plus most importantly my convocation too. It was one of the proudest moment of my life when I received my Bachelor's degree from then President Ong Teng Cheong as I was one of the top award winning students. Of course that was long ago and I can't say the same about my mental acuity which has diminished considerably over the decade from disuse!

Pinkie: Ah, could I easily infer that you studied in an co-ed school?

I have good vibes of Kallang. It felt like home when I performed there again sometime in year 1994.

Cool insider: I am certain that your family members who have attended your convocation felt even happier for and more proud of you. :)

I was wondering how you carry the double bass because I see how huge it is! hehe... I would need extra help for that.

I wonder how they re going to transform the Kallang Theatre and its surrounding. Lots of work going on there now.

Eastcoastlife: The double bass is huge. Yet, it is hollow inside. The challenge is how to walk with a big double bass being held in front of oneself, not the weight. ^_<

I hope to take a look at Kallang Theatre then, after it went through the transformation.

Listening to you reflect on your performance days reminds me of my own. Was no fun moving big drums around either, though managed some how. And I liked the back of the house of auditoriums and such. :)