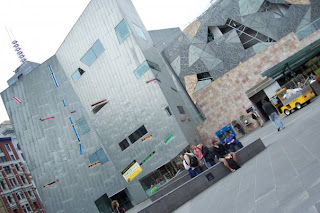 I went to find out a bit more about the history of Federation Square after my return from Melbourne, and found out that "In July 1997, Lab architecture studio, in conjunction with Bates Smart, were awarded the design contract for Federation square." Essentially, it is a cultural precinct in the city of Melbourne, Australia.

According to Wikipedia, Federation Square is made up of "a series of buildings containing a public broadcaster, art galleries, a museum, cinemas, exhibition spaces, auditoria, restaurants, bars and shops around two major public spaces, one covered (The Atrium), the other open to the sky, and composed of two spaces that flow into one another (St. Paul's Court and The Square)."

HQ shared with me during my visit that there were various controversies that surrounded the design of the Federation Square. Aside from these, the high cost of the project and the delay in its completion also brought about much public's outcry back then. However, I suppose everything would be worth it eventually.

I can't help but to feel attracted to Federation Square after some moments of visiting it. Despite its unconventional appearance, there was something inspiring and moving about its architecture. I think great architecture simply moves a person and uplifts the souls of people. Go there and experience for yourself to see if you would feel the same way that I did. 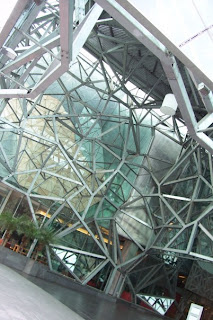 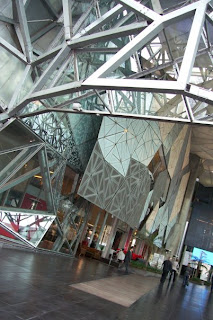 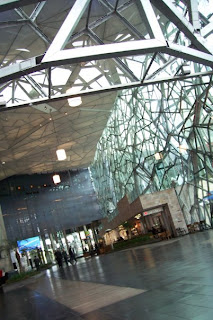 There was an indoor amphitheatre inside the Federation Square which HQ told me was a performing space. I love the way that the sun shines through the glass panels. There was something fascinating about these glass panels. Look at the individual glass panels and you would realise that each is custom-made and unique. HQ shared with me briefly about some architectural concepts, and that got me to wonder and marvel at how the engineers ever make the bars supporting the glass panels resolve themselves.

I was so delighted and intrigued by the indoor amphitheatre that I couldn't help but dream of performing right there on the double bass. Now, just use a bit of imagination and imagine I was playing a moving piece of music on the stage of Federation Square's indoor amphitheatre. Be my imaginary audience. 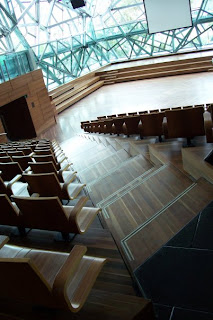 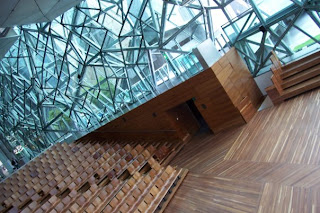 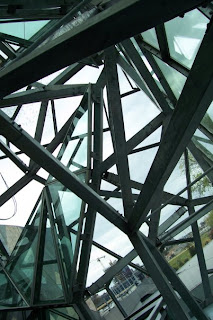 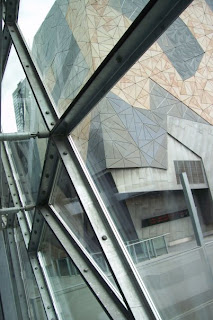 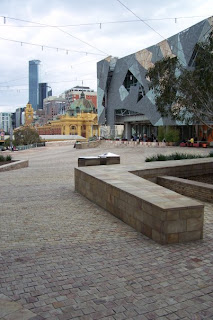 If you like the Federation Square as much as I did, you could learn more about it here: http://www.federationsquare.com.au

Agree with kyh. It is certainly a building of art.

khk: Could it be the other way round that the architecthure of the Beijing Olympic Stadium resembles that of Federation Sq?