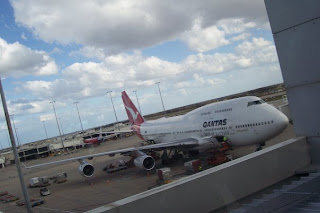 I was lucky. I asked one of the hotel staff where I should wait for the Skybus Super Shuttle Service, and he kindly gave me very clear directions. Otherwise, like the hotel staff had said, the Skybus Super Shuttle that would take me to the Southern Cross Station, to transfer to the Skybus that would take me to the airport, would not wait for anyone if the driver did not see any passenger at the specified waiting area.

At the Melbourne Airport, I did the necessary checking-in and then took time to eat the Greek salad and Vegetarian Souvlaki that I had bought earlier the day. I was rather early for the flight. That didn't matter, perhaps I have a preference to be early than to risk missing the flight. Strangely, it was for pure pragmatic reasons that I would not risk missing the flight. I was actually hoping that my stay in Australia would not have to end so soon. Anyway, at the very least, I had a pleasant stay in Australia. It was very fulfilling to meet up with friends and to enjoy the liberating experience of having travelled a couple of places in Australia alone by myself.

I called XS on the phone before clearing the immigrations at the airport . A month later, I realised that the words of insight that she had shared with me over that phone call still stay in my mind. I am thankful to have insightful friends like her to learn from. Hopefully, with her evolving wisdom, she does realise that she has many gifts of her own, and that she has the power already in her to accomplish many great and wonderful things. Wishing her all the best.

Before I end this post, my heartfelt words of appreciation to RL, XS, HQ and SG, for making my short stay in Australia a very memorable and meaningful one. Thank you.

I am sure you've brough back with you the precious memories and the experience you had through out your stay. Next trip soon?