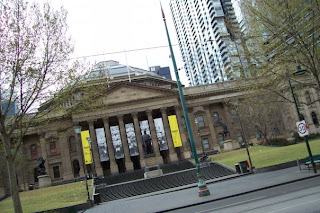 When the task of ensuring that I had sufficient postage was accomplished, I continued the solo walk about the city of Melbourne, and headed for the State Library of Victoria, for breakfast.

SG had recommended me to try an item at Mr Tulk. Mr Tulk is located at State Library of Victoria, 328 Swanston St, Melbourne 3000. I learnt that this establishment is named after Mr Augustus Tulk, the first state librarian of the library.

This place has a lovely ambience, and is a great place to read and enjoy coffee. Alright, I don't usually drink coffee, so I settled for camomile tea. I also ordered the baked eggs with spinach and something else, but my goodness, I can't quite remember the name of the dish. Just see the photo below to find out what I had for breakfast that day, please? 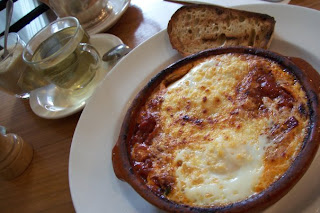 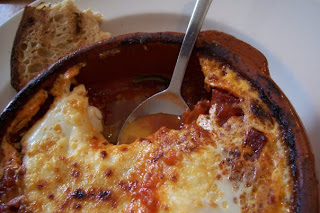 The baked egg dish was novel. It was interesting to scoop and enjoy the egg yolk as it oozed out. Breakfast was lovely.

It was a rather rainy day after the breakfast. There was shower for quite a while. Anyway, I was in the mood to walk about and the weather did not bother me much. I was browsing through the photos that I had taken that day, and the photos suggest that my eyes seem to be attracted to the quiet lanes of Melbourne, the trams and the horse-carriage ride. 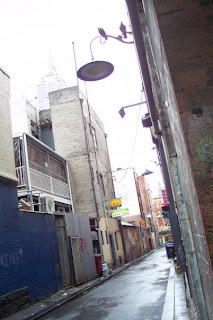 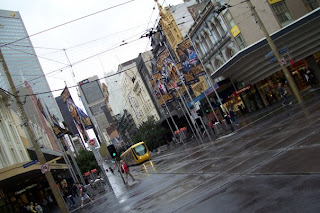 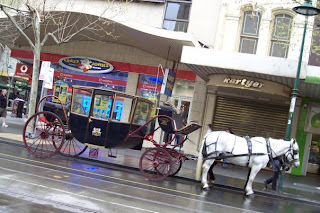 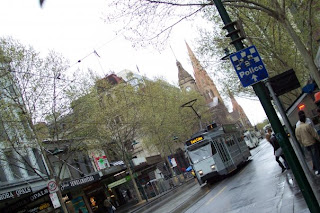 Before leaving the hotel, I made a trip to Lonsdale Street. There is a well-known Greek restaurant, Stalactites Restaurant that opens 24 hours along 177 - 183 Lonsdale Street. Both HQ and SG told me that it's a well-known Greek restaurant in Melbourne, so I made it a point to check it out. I settled for Greek food that was basically vegetarian because I didn't want to wait. It would take at least 15 minutes for the meat to be cooked if I had ordered anything with meat in it. I ordered Greek salad and the Vegetarian Souvlaki. 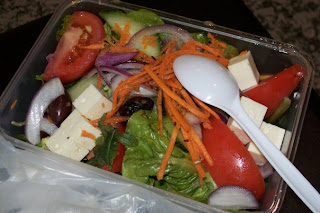 I left the hotel around 12 p.m. via the Skybus Super Shuttle Service that HQ had recommended. It was a fairly affordable and efficient way to get to the Melbourne airport.
Posted by oceanskies79 at 11/06/2008 09:41:00 pm

Glad you found the egg interesting..:) I can't rememeber the name of it either! There's spinach, tomatoes, and egg in it I think... Oh you din get to try the souvlakis at the greek place? Perhaps you went a bit too early :) Hahahaha... Of cos I don't find you rude at all! I definitely respect your need for space...Don't be silly!!! :)
sg

I have tried the Vegetarian Souvlaki. But yah...waiting for 15 minutes for the meat to be cooked properly puts me off from getting anything with meat. Furthermore, I have adjusted my diet to one with less meat, particularly red meat.

Wow, the baked egg looks interesting. I must try it next time I visit Melbourne.