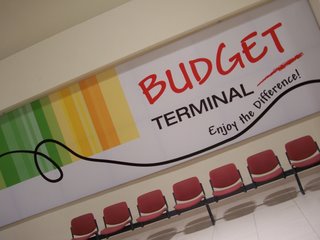 We reached the Budget Terminal just after 4 a.m. Our flight is set to depart at about 6.10 a.m. It was free seating on Tiger Airways. The Boarding gates weren't opened until about 5.30 a.m. so we had spent quite some time waiting for time to pass.

There is a Hans eatery at the budget terminal. I did not buy anything from the eatery as I had already taken my breakfast that day. I heard from my mother that the price from this eatery is about the same as other Hans outlets at other parts of Singapore. 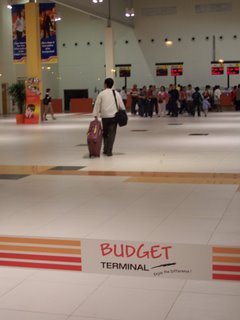 In the early morning, the Budget Terminal was fairly quiet but I like the peace. After clearing the immigrations, I spent quite a bit of time at the only bookshop at the Budget Terminal. The rest of the shops did not interest me much. I quite like the no frills approach that the Budget Terminal appears to adopt. At the same time, the facilities are well-maintained and clean. Life can be pleasant when it is kept simple, yet neat.

When it was time to board, it was time to queue. The principle appeared to be that of: whoever was first in the queue would be the first to get up the plane. I got myself a window seat.

Up on the plane, I stole a snapshot while peering through the windows. The snapshot reminded me that I had walked up a long flight of stairs just to be up onboard the plane. It was nothing much for me, but I suppose such exercise would require a lot of effort for the many elderly passengers onboard the same plane. 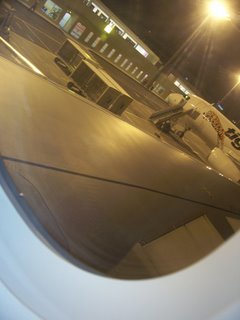 Overall, the ride on the budget airline was pleasant. Facilities were clean, service was friendly. I didn't mind that there was no inflight-entertainment. I had a magazine to read, and lots of winks to catch up on while I was on my way to Hainan. I suppose I was quite tired that day.
Posted by oceanskies79 at 11/14/2006 11:48:00 pm

Email ThisBlogThis!Share to TwitterShare to FacebookShare to Pinterest
Labels: Hainan

Sounds like you made a good choice. Great start to your trip. :)