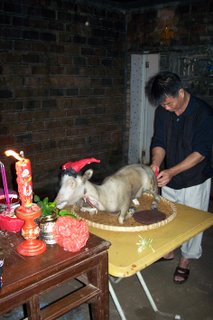 Following my last post, The story of the mountain goat, here's more about the rituals. Please bear with my limited knowledge of the ritual. While I had witnessed it, asked a bit about it, it is just something quite remote to me as I do not practise it myself.

After the chicken and the goat were slaughtered, they were brought to the altar. I could also see crabs. My uncle had to travel all the way to the nearby town to purchase these crabs. I was told that for the ritual, three kinds of animal would be required. If I had understood correctly, these three kinds of animal are: animal that has feathers, animal that walks on land, sea-creature. But I think I could be wrong, so I hope someone could please correct me if I were to be. 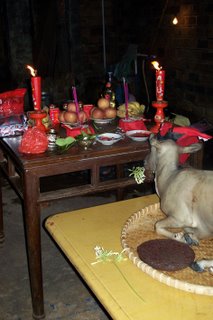 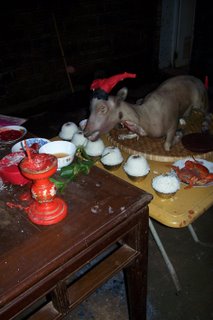 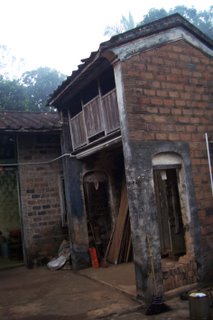 I remembered it was fairly early in the morning. I could still feel the dew in the air. That was not the end of the ritual. The offerings on the altar were later moved to a table in the house.

In the house, I saw my uncle burning incense paper. I was feeling quite worried when I saw him do that. There was no fire-extinguisher I could see nearby, and I was quite worried what to do if the flames were to get too strong. Anyway, thank goodness that my worries were unfounded. Maybe I should suggest that my parents get fire-extinguisher for home-use when they visit the village in the future. 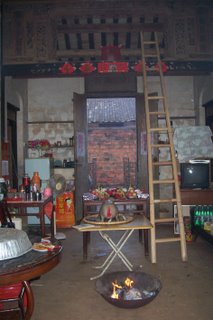 In the above photo, you would see how the offerings were laid on the table, in the house. The ladder leads to an altar that was meant for us to worship our ancestors. 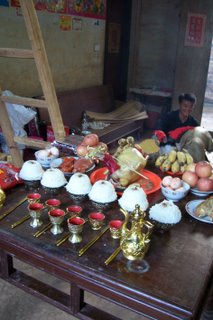 This was not the end of the ritual. I later saw my uncle taking a small portion of each of the various offerings out of the house. He then laid them on a bench. More burning of incense paper followed. Firecrackers were also lit after that. I have no idea of the significance of all these steps. 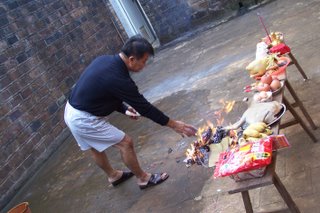 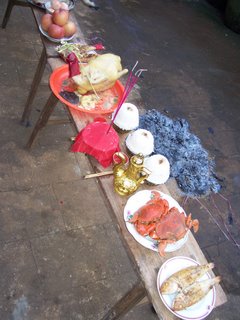 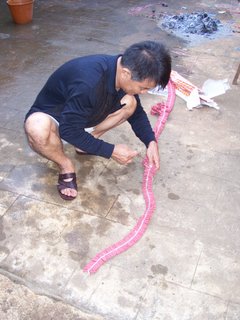 That was probably all that I can remember of the ritual. Anyway, if the ritual could give the persons who want the ritual to be performed a good peace of mind, it then has a purpose to exist, I suppose?
Posted by oceanskies79 at 11/25/2006 04:54:00 pm