In the afternoon of 9 Nov 06, my parents and I touched down at Meilan Airport. My father's younger brother, Uncle Wang welcomed us at the arrival hall. It was very nice of him to bring along herbal drinks and glutinous rice balls for us.

We then took a taxi to village which is my father's hometown, the place where he was born and raised. On the way to the village, I felt so tired that I did not bother to take much look at the scenery. All that I had wanted to do was to close my eyes and to rest.

Before I knew it, we reached the village. I stepped into the house which I was told that my late paternal grandfather had worked hard to earn enough money so as to engage people to help build it. I met two of my paternal aunts and my grandmother. I remember that my grandmother wore a bright smile when we greeted her. 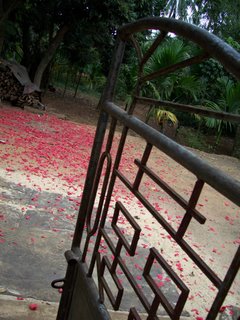 Remains after a firecracker display on Day 1.

I did not realise how loud firecrackers can be until I was at Hainan about a week ago. To welcome us, my uncle took out firecrackers, lit them, and the firecrackers started cracking. The sound emitted was very loud. 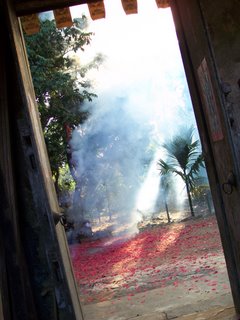 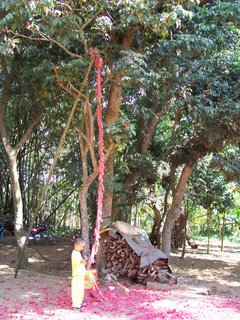 
Firecrackers. These are novelties to me as the use of firecrackers is highly restricted in Singapore. I can't help but to feel a little fascinated, and at the same time, fearful of being too close to the cracking firecrackers.
Posted by oceanskies79 at 11/15/2006 10:48:00 pm

So they scare away the evil spirits?

SA: Yes. Supposedly, they were meant to scare away the evil spirits.