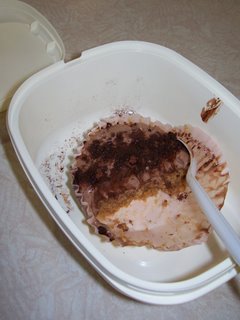 After my double bass lesson today, I met up with JY.

JY has been very kind to travel all the way to a place that was nearby where I was having my double bass classes to pass me the pseudo-tiramisu that she has made! I could not help but take a photo of it as a momento. (Pardon me, I have taken a few spoons of it before taking the photo. I wanted to show the biscuit-layer.)

It tasted nice. I particularly like the layer containing the the zabaglione cream. I like the generous serving of cocoa powder on on the surface layer. Overall, the pseudo-tiramisu was rich and heavenly.

Instead of Savoiardi, JY had used what appears to be made up of the same ingredients as those found in the base of cheese-cake. I think it is a pleasant and refreshing idea to have such base.

Email ThisBlogThis!Share to TwitterShare to FacebookShare to Pinterest
Labels: friends

nevermind the picture, I wanna eat! haha... so clever tat she knows how to make this... :)

she will make a good wife. and she will hit me later. lol

Pinkie: Yes. I agree about you said about JY.

Pinkie, that's the reason for adding you on MSN. wanted to ask if you would like one. =)

none for you SA. only the recipe if you want.

hahahaahaha. Goldilocks came over to hit me!!!! lololol!!
cannot say you didn't warned me! :P