After my lunch on 9 Nov 06, my third uncle took my parents and I to a nearby town of Wencheng (if I remember the name of the town correctly).

We hired a private car to the town and the journey took about fifteen minutes from the village. I remember myself feeling so tired that I was closing my eyes throughout most of the journey to the town. 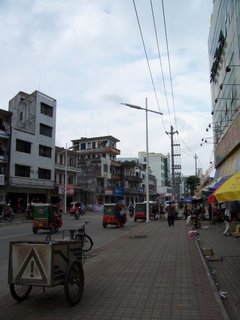 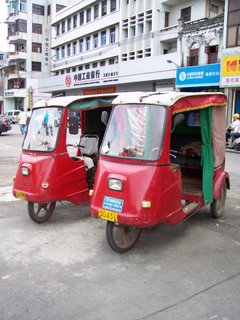 At the town, I spotted red-coloured three-wheels vehicles that I have not seen before. When I peered closely at these vehicles, they appeared to be a cross between a motorcycle and a two-wheel sedan. Such vehicles can take up to two passengers at the back, and I heard that in this town, they function like taxis. One unanswered question that I still have at the back of my mind is that where are these vehicles assembled? 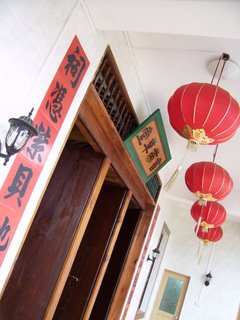 Our first stop at the town was the Clan association. This clan association serves people with the same surname as mine. At the Clan association, I saw many photographs in frames. These were to give recognition to those who have made contributions or have donated to the association. I read the names and brief profile of the people whose photographs were put up and found that a number of them were overseas Chinese. It reminded me that overseas Chinese have made a number of contributions to China even if they are miles away. At the association, I saw the personal computer that my father has sponsored too. 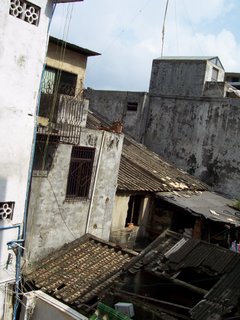 View from the balcony of the Clan Association

The next stop was a traditional Chinese medicine shop. My third uncle recommended that I consult a Chinese sinseh (doctor) there for my cough problem. The sinseh diagnosed me and prescribed me the medicine. As such, for the next few days at the village, I had to drink the Chinese medicine that my paternal aunts so kindly brewed for me.

I felt quite tired and was having a headache that day. As such, we called for a taxi to take us back to the village. One thing that I have observed is that the folks in this part of Hainan seem to have to call for a taxi or private vehicle if they want to take one. It appears not too easy to hail for one on the roads. However, it appears fairly easy to hail for one of those red-coloured three-wheels vehicles.

I think the idea of a clan association is neat. Wish I could learn of my family. I have such an obscure unimportant name. :(