Preparation of the Feast

The Thanksgiving ritual seemed to be a good reason for relatives of the family to travel from where they are to the village. I was told that I would get to see my other relative later after the ritual, and there will be a feast prepared for the relatives who turn up.

I found out that a number of my relatives live in parts of Hainan fairly far from the village that I was staying in. One of my cousins who had came for the feast had to travel three hours on the lorry to reach the village.

While waiting for the relatives to turn up, I was treated to a simple meal which I considered my breakfast for the day. 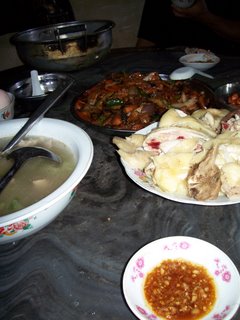 In Singapore, when people eat chicken, it is quite common for people to dip some chilli sauce to go with the chicken. The chilli sauce would usually be made from chilli, garlic and the fatty-oils that have oozed out from a cooked chicken. In Hainan, I realised that the folks do not usually eat chicken with chilli sauce. Instead they use a sauce that comprises of the following ingredients: sesame oil, garlic and a kind of vegetable which has a fragrance similar to that of cooked chicken meat. The sauce was a novel to me that I kept helping myself to the sauce.

After the meal, I figured that I shall make myself seem like a ignorant city-dweller in the village by taking photographs of the preparation of the feast. 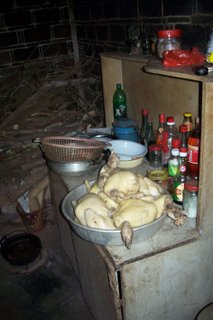 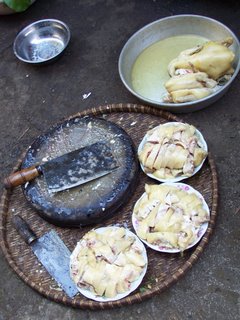 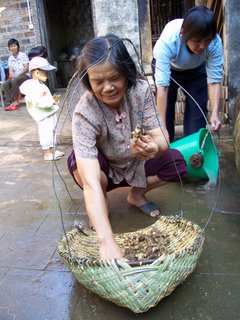 Ginger. I was fascinated to hear that the ginger was grown by my relatives. 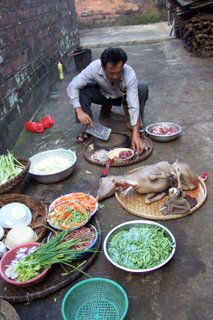 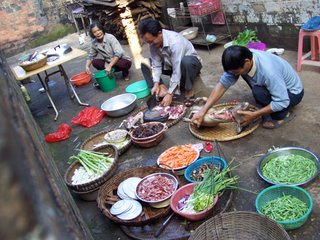 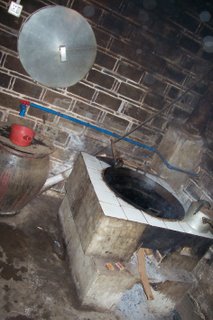 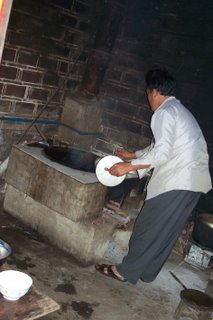 The end result of all the preparation was food on the table, enough for quite a number of households.

I would infer that in this village, the villagers are dependent on their efforts and the fertility of the lands to be self-sufficient. So long as they can grow enough crops to meet their needs, they can survive. In a city like Singapore, I would infer that the way to gain self-sufficiency (since there is hardly any land for growing our own food) would be to have a relevant skill and/or knowledge that can bring in sufficient income and to spend within one's means.
Posted by oceanskies79 at 11/26/2006 09:15:00 am

did u bring back the sauce for the chicken? Is tis a standard sauce for chicken in whole of Hainan and izzit available for sale at its supermarket if any? just curious...

Pinkie: I did not. It is difficult to get the plant that taste like cooked chicken meat in Singapore. However, I heard that the plant is easily available in Hainan. I ate at one of the restaurants in Hainan, and it also served that sauce.

I think my wife makes that sauce for some of our chicken meals too. :)

ah ic... so it's available at hainan, not restricted to your relatives/clan. Wonder if it's on sale at the supermarket here.. hmm..

The sesame oil and chopped garlic can be easily found in Singapore. I am not too sure about the plant. My mum told me that the name of the plant is "ji1 cao3"