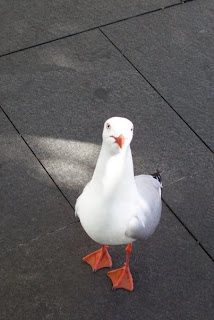 Thereafter, it was time for lunch. I bought Fish & Chips from a food outlet located near Circular Quay. When I sat down to have my lunch, I was greeted by a seagull. A seagull that amused me. 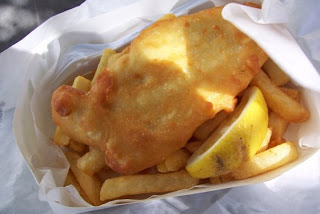 My lunch that day: Fish & Chips.

As I was eating my lunch, the seagull looked at me with a keen pair of eyes. Maybe it was not looking at me. Maybe it was looking at the Fish & Chips in my hands. After a while, I noticed it was jumping on the spot. Was it trying to capture my attention? I was amused and humoured.

Whatever it was, I decided not to give in too early to this seagull even though I realised that it had wanted a share of the Fish & Chips that I was eating. The thing was that the Fish & Chips was pretty hot because it was cooked only after I had made my order. It won't be too safe to feed a seagull with piping hot Fish & Chips, would it? 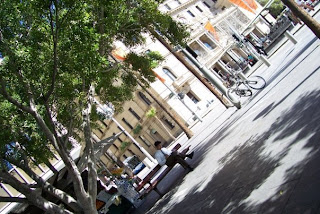 I sat on a bence facing what you see on this photo to have my lunch and the seagull stood beside me most of the time while I was having lunch.

While having my lunch, the seagull continued to find ways to attract my attention. On a few occasions, it made a few calls. I also had the opportunity to observe this very seagull being so alert with all signs of potential availability of food nearby it. There was a person who finished her lunch and left crumbs of it on the floor. This seagull was so alert that it flew almost instantaneously to the source of food and claimed the food. I got to witness how this seagull tried to protect its find from another seagull with a short fight. Goodness, maybe this seagull was really hungry?

While the seagull was eating the crumbs of food that it has successfully protected from its contender, I have had some peace away from the seagull.

The Fish & Chips were quite good. It was just that I was not at my best state of physical health, and by the time I ate about 70% of the meal, I could no longer bring myself to eat any further. By that time I was done with my meal, the Fish & Chips had cooled quite a bit.

I left the tray of the uneaten Fish & Chips from my lunch on the floor. The seagull was pretty careful. It did not even attempt to touch it, although it looked very intensely at the Fish & Chips for quite a while. Realising that it was probably feeling fearful, I pushed the tray of Fish & Chips further away from me, and tried to look away. That moment, the seagull quickly seized a piece of fish to savour. It was quite interesting to see how it enjoyed its meal. Thereafter, it took a piece of chips.

I was pleasantly amused by this seagull. Anyway, in order to refrain from overfeeding it, I decided to throw all the remaining food from my lunch into the nearby bin. It was time for me to set off for St Leonards, which is located at the Northern part of Sydney.
Posted by oceanskies79 at 10/06/2008 08:48:00 pm

Now your story is available for reading. =)

JY: Yes, it is. This was the amusing story I had wanted you to read. :)

I encountered many seagulls when I was having my lunch of fish and chips in Melbourne. :)
I was sitting at the harbour but had to flee from them!

seagulls here get quite agressive when comes to food.

wah, you're so kind to the seagull.

eastcoastlife: It looks like we have a different experience of the seagulls even though we were both having fish and chips for lunch.

Doreen: Ah...then I shall be thankful that I only saw ONE amusing seagull, and not MANY seagulls. *winks*