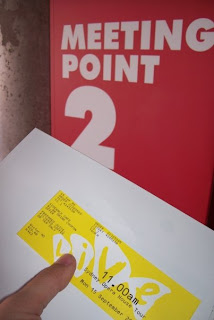 I'm glad that at least the physical pain that I had experienced in the late morning that day had not stop me from attending the Essential Tour. Thank goodness.

I was lucky that day, as part of the "Spring Special" promotions, the price of the tickets to the Essential Tour was reduced from AUS$35 to AUS$29 per pax. I would still go for the tour even if there's no discount. Yet, psychologically, a dollar saved is still a dollar earned. 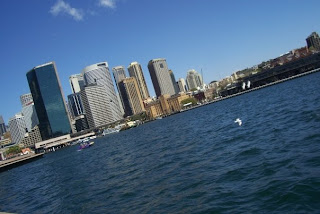 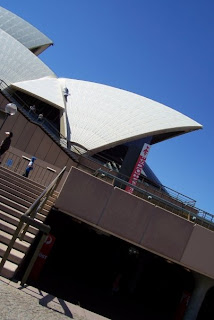 At 11 a.m., the tour I had registered for was ready to commence. There was at least twenty people in the group. I was the only person from Singapore in the group! Everyone was asked to deposit their bulky belongings in the Cloak Room. That certainly helped to relieve me of some baggage.

Sydney Opera House is an remarkable architectural masterpiece. Jørn Utzon is the architect who designed this fabulous work. It is listed on the UNESCO World Heritage List since 28 Jun 2007. I cannot fully describe how just by being in the building, and exploring about it had brought me much inspirations. Maybe the photos could not even do it justice. Photos and writings may not fully express how awesome the Sydney Opera House, so I am glad that I was simply there to experience it. 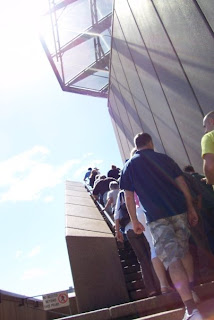 The tour group climbed up these flights of stairs
which are normally out-of-bounds to members of the public. 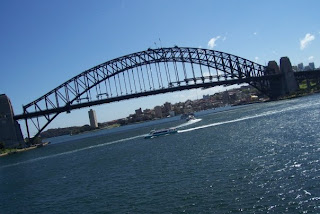 The view of Sydney Harbour Bridge from Sydney Opera House. After climbing the flights of stairs. 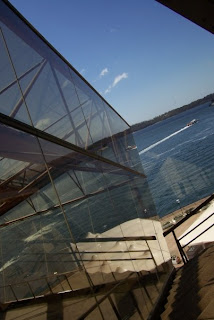 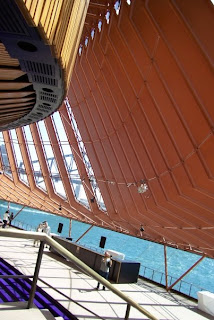 Just outside the Concert Hall of Sydney Opera House. 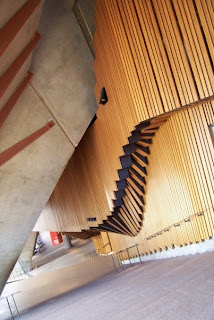 Outside the concert hall. I love the curves and the lines. 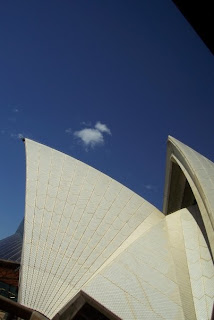 Other than learning about the history of the Sydney Opera House and the amount of challenges that were met in building this fine architectural masterpiece, tour participants were also treated to a tour about various parts of the Sydney Opera House. These include: the Drama Theatre, the Playhouse, the Concert Hall and the Opera Theatre. We even had the pleasure to catch glimpses of a rehearsal that was held in the Concert Hall. The acoustic was good.

We also learnt that all the stage-managers who work at the Sydney Opera House, at the time of our visit, were females. Perhaps it goes to show that the job would go to anyone, irregardless of gender. Cheers. 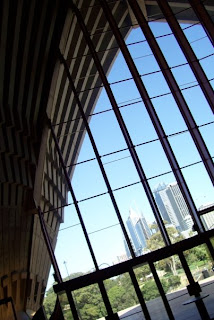 The waiting area outside the Opera House. 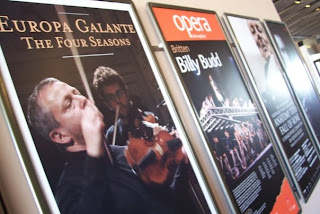 The ad of Europa Galante's performance of Vivaldi's Four Seasons caught my eyes. 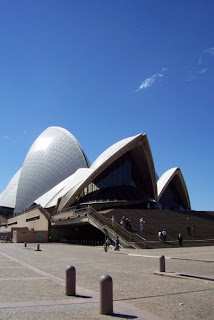 The tour ended at the Opera Theatre with a video of the soft-spoken Jørn Utzon who designed the Sydney Opera House. He shared a inspiring quote at the end of the video. A speech which I wished that I could have jotted down back then. If not, I could only remember the essence of it vaguely by now. However, luckily, I've found a YouTube video on Jørn Utzon, and I've found the quote that he had quoted: "Give me a job so that I can devote myself with love and skill 100%. Then it is not a job anymore, then it becomes an art and an expression of love. And this is the Opera House."

Do check out the YouTube video. On the side, I am in the process of finding and securing a job that I can devote myself with love and skill 100%. May I get there soon.

An inspiring tour that I am glad I had went for. I highly recommend the Essential Tour to all first time visitors to the Sydney Opera House who likes architecture and/or the performing arts.
Posted by oceanskies79 at 10/05/2008 09:18:00 am

How awesome! To be on top of Sydney Opera House! I would take a close look the next time I'm in Sydney.

that's a wonderful life motto. to find a job that one love and can give 100% skill on it.
i wish you success in finding yours. :)