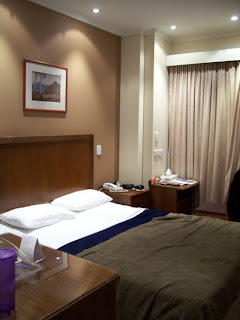 I think yours truly could survive without television. When I was in Sydney, I tried to check out the local television programmes in Sydney but none particularly interests me. In the end, after watching the local news for about half-an-hour, I switched off the television due to a lack of interest.

However, thankfully, there was a radio in my hotel room. The radio was my favourite companion. It was probably instinctive in me that I tuned the radio to ABC Classic FM. "Life is Beautiful" with the classical music.

Compared to the Singapore's classical music station, 92.4 FM, ABC Classic FM offers a comparatively more interesting mix of classical music. One could get to listen quite a number of music written by the Australian composers, and such music were certainly refreshing to the ears even though they were pretty unfamiliar. In fact, I am considering the possibility of continuing to listen to ABC Classic FM online from Singapore because of the comparatively more interesting and diverse range of classical music that it offers.

The best part about having a hotel room all to myself while I was having vacation in Australia was that I could fill the room with classical music anytime I want, without any other disturbance from the television. When I was Sydney, I listened to ABC Classic FM in the morning, and I listened to it the entire night even when I was obviously asleep. How lovely. Indeed, life is beautiful!
Posted by oceanskies79 at 10/20/2008 08:21:00 pm

I need a TV to watch the news before I sleep every night. :)

When I was holidaying in Australia, I didn't have time for the TV nor radio. After a bath, I would be fast asleep. It's out very early in the morning and back to the hotel room very late. :)

eastcoastlife: Hello!
Were you with a tour group the last time you were holidaying in Australia. I think Australia is relatively safe to tour on one's own, free-and-easy. That way, you can have some free time to watch the news. :)