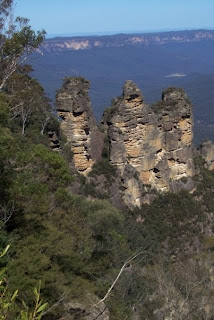 It appears that The Three Sisters rock formation is probably the more well-known and widely photographed part of the Blue Mountains.

If I do not check up the internet, I would probably only be able to recognise The Three Sisters rock formation if I were to see a photo of it. Yet, it would be quite unlikely that I would remember that the names of these three sisters, according to an Aboriginal legend, are 'Meehni', 'Wimlah' and Gunnedoo'. There is a romantic and mystical story behind The Three Sisters. That speaks about the depth of imagination that human beings could be capable of.

There is a Giant Stairway that allows one to be very close to the Three Sisters. I did not check it out for the steps were too steep for me to feel at ease to try out. Furthermore, I was by that time starting to feel hungry. Nevertheless, I had managed to witness the spectacular views of The Three Sisters and the neighbouring natural structures nearby The Three Sisters.

Frankly speaking, I still do not know much about Blue Mountains and its vicinity. As such, I shall just attempt to focus on sharing photographs here. 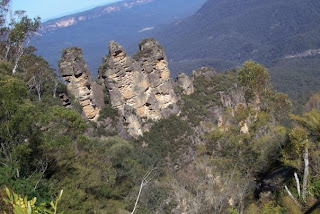 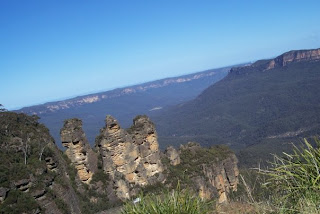 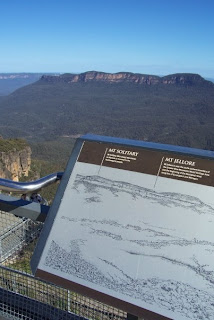 Initially, I was contemplating of visiting the Leura Cascades. However, by that time of the day, I was hungry for a late lunch. I was also physcially in need of rest soon by then. The walk to Leura Cascades to the Gordon Falls Reserve and the Bridal Veil Falls would take about one hour.

I figured that attempting such a walk by that time of the day would stretch me way beyond my physical limits, leaving me totally exhausted. Since my objectives to visit Blue Mountains were to recharge and to relax, as much as I would like to see as many things as possible, I had to learn to let go and simply just head for a short walk that would allow me to enjoy the views from The Gordon Falls Lookout. That took less than 20 minutes of walk and was definitely more manageable. 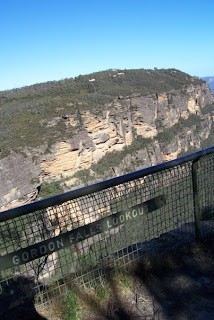 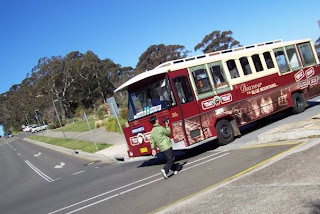 RL had highly recommended me to tour Blue Mountains using the Blue Mountains Trolley Tours. However, just because of the sheer convenience of purchasing both the train and bus tickets at the same place, I chose the Explore Bus instead. 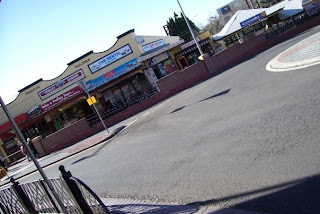 Katoomba, near the Katoomba station. 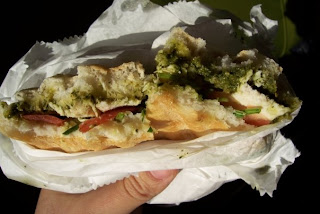 I was glad that I was kind enough to myself as by close to 4 p.m., I was famishing and order a chicken with pesto Turkish bread, and was just in time for the 4 p.m. train back to Sydney city. The train back to Central railway station (which is in Sydney city) only comes about once an hour. I had my very late lunch while I was on the train. I was tired by that time of the day, yet energised internally by my visit to the Blue Mountains such that I left with a contented feeling. That left me leaving the Blue Mountains on a positive note. Cheers.

RL was thoughtful. She asked me to give her a call when I reached my hotel after my Blue Mountains trip. It was probably because she wanted to make sure that I was safe when she realised I was travelling there all on my own. Yes, I was glad to tell her that I had made it to Blue Mountains, and back safely, on my own.
Posted by oceanskies79 at 10/14/2008 10:46:00 pm

you're very resourceful and brave. and that bread looks good, and more so when you're that hungry eh? lol.

Misti: Thanks for your compliments. The bread tasted good especially when one's hungry.

We also have Three Sisters here but they are not as close as those one in Sydney. May be they don't like each other much. Hahaha

Doreen: I didn't know that there's also Three Sisters in New Zealand...thanks for letting me know. :)