Time flew so fast, and before I was able to fully savour the moments that I had spent in Sydney, the plane took me up the skies to leave Sydney for Melbourne. I chose a window seat. The journey to Melbourne took about 1.5 hour, and offered some interesting views of Australian's landscapes from the plane.

One of my friends, HQ, very kindly and generously took time to meet me at the Melbourne Airport. HQ and her husband, IK, very graciously made the effort to drive to the airport to welcome me. They even drove me from the airport to the hotel that I was staying in Central Melbourne. Their thoughtful gestures were very much appreciated. In the car, I was honoured to see their daughter, FY who was about six-weeks old then. It was lovely to be able to share their joy of the newborn child.

After we reached the entrance of the hotel, hospitable HQ accompanied me to the hotel with FY, and even tried to help me get orientated to Central Melbourne. I learnt that the Central Business District of Melbourne is a planned one. If one were to take a look at the map of Melbourne's city and one can notice how neatly organised the city is. It looked like a grid in terms of its layout, doesn't it? 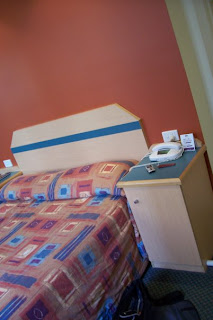 The hotel room that I stayed in.

HQ and I caught up with each other in the hotel room. It has been quite a while since HQ and I last met each other face-to-face. As I write this, I recall the value of a statement that I had read years ago in Zander and Zander's The Art of Possibility that goes "Certain things in life are better done in person". I suppose there's no better way to share HQ's joy of motherhood than to send my congratulatory wishes to her in person.

After I had some rest at the room, HQ carried FY and showed me about Melbourne. We visited a few arcades and malls. HQ treated me to a lovely chocolately meal at Koko Black. The dark cocoa drink, Koko Black Hot Chocolate, that I had was very good. It was way better than any chocolate drink that I had in Singapore, and it was dark cocoa! HQ said that the relatively colder weather in Melbourne makes the warm cocoa drink extra savoury. I don't know if that's true, but the drink was deliciously wonderful. 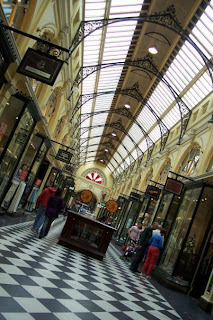 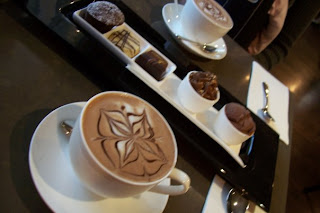 A treat to Koko Black! Savoury.

no wonder you din feel like choc dessert when I suggested it.:) I was thinking of bringing you to Koko Black as well!
sg

SG: Welcome here! Yes, I would have love to consider choc dessert if not for the fact that I already had it earlier the day. Thanks for the thought. I suppose it means that great minds think alike. Koko Black is great!

Meantime, cheering you on. All the best!

yes Koko Black is like my fave choc place in melbourne :) Thanks.. handing up my thesis is a big load off my chest... now it's just the exam, that I'm so unmotivated to even start preparing for it! :p

SG: I wish one day Koko Black comes to Singapore.

Maybe all you need is to take a short break, and then you may find energy to rediscover the motivation in you?