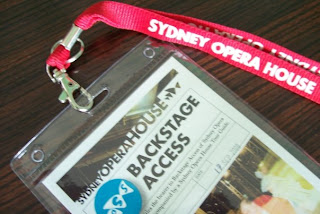 If the beauty of the Sydney city in the morning is worth rising up early for, the Sydney Opera House's Backstage Tour will be a tour that would be worthwhile going for.

The Backstage Tour is a fairly intimate tour. The maximum capacity for each day's Backstage Tour is eight persons. For my tour that day, there was seven of us, including myself. Each tour starts from 7 a.m., and is approximately two hours in duration. Everyone came earlier than 7 a.m. and so the tour guide rewarded all of us with an early start to the Backstage Tour.

The experience was a rare one. We had the privilege to visit various parts of the Backstage of the Sydney Opera House that are restricted to performers and members of the crew. I was excited simply to visit these exclusive parts of the Opera House. Most of the areas have strict rules on photography, so in this post, you would only see very limited parts of what I had experienced during the tour. As such, this is the tour worth going for if you should feel that you are still missing something after looking at the photos here. 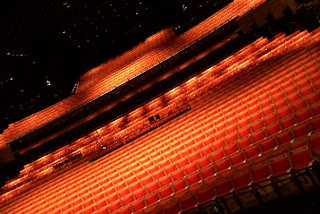 A snap-shot of the Opera Theatre, Sydney Opera House.

While at the Opera Theatre, the seven of us participants got to learn how the props are being laid out at the Opera Theatre. The rule for all visitors is to leave the props untouched. The props, no matter how disorganised they may seem to be placed, are actually placed in a manner that allows the fastest retrieval during the actual performance. We also got to hear about the important roles of the mechanists. It was enlightening to hear how things work behind-the-scene at the Opera Theatre. We learnt how the lightings were being done and how the props could be set up. We also got to hear about how the stage-lifts work. 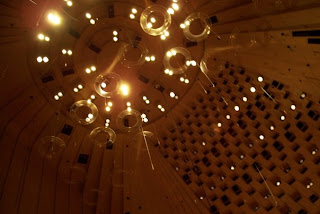 Notice the 'acoustic clouds' of the Concert Hall.

For yours truly who plays a double bass, there's one part of the Sydney Opera House that would definitely exhilarate me if I could visit, and that is the backstage of the Concert Hall. We entered the Concert Hall and the tour-guide introduced us to the magnificent Concert Hall. My eyes were set on the acoustic-cloud. I tried clapping my hands a few times at the Concert Hall to hear if the clapping sound would carry itself to the other end of the concert hall. It did. That made me perceive the concert hall to have good acoustics. Another structure that caught my attention was the organ. I often wonder how the organ actually operates.

Standing on the stage of the Concert Hall, I imagined it would be a fabulous experience to play on the stage.

As we left the stage and headed to the backstage, we saw a wall at the backstage area, near the entrance to the stage. This wall had a lot of lip-marks on it. The tour-guide told us that wall is affectionately known as and designated as "the kissing wall". The wall was designated as the wall for performers to kiss on, and to leave behind their lip-marks for posterity to see. I did not kiss the wall, but at least one of the other participants from the tour-group did. 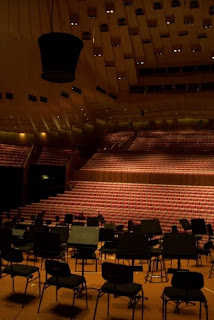 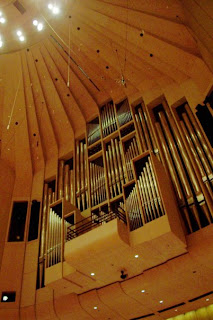 We also got to see one of the dressing rooms of the Concert Hall that were meant for the performers. I felt a nice sense of familiarity when I saw a number of double bass flight-cases at the backstage area.

The group also had the pleasure to visit the Conductor's Room of the Concert Hall. This area is designated, as its name suggests, for the conductor. The room offers one a fairly good view of the Sydney Harbour Bridge. There was a grand-piano in the Conductor's Room and participants were offered a chance to pose while sitting next to the piano, on the piano stool. The tour guide helped me to get a photo of myself posing at the piano.

The tour also brought us to various places such as the Drama Theatre, the Studio, the Green Room and the Rehearsal Hall. 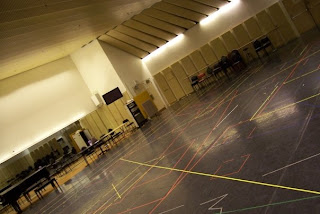 While we were at the Drama Theatre, we learnt about the different technologies that were available at this venue. We learnt that there were two major kinds of trap-doors available here: the stationery trap-doors and the movable trap-doors. We were also introduced to how the fly-bars work. The tour-guide also showed us part of the mechanism of the double-revolve of the Drama Theatre. It was interesting to know how things work there.

The Studio is versatile in its nature. I recall hearing that recordings at the Sydney Opera House are usually done at the Studio. The Studio is so versatile, that it can be used as a dance-floor, for cabaret, small theatrical productions and more.

Here's a gist of the tour-guide's reply. The term Green Room could have come from Roman's tradition. In Rome, performers traditionally assemble and gather at a garden (which has lots of greenery) before the start of each show. As such, traditionally, the place where performers gather to refresh themselves before the performance (usually a place where they would have their meals too) has been referred to as the Green Room. Anyway, there are different theories too.

The Green Room is only opened to staff of the Opera House and the authorised performers. As such, members of the tour-group were privileged to have our breakfast at the Green Room. There was a number of breakfast options that each person on the Backstage Tour could choose from. If I remember correctly, one could choose between Continental Breakfast, Breakfast with simply fruits, and Big Aussie breakfast. I chose the Big Aussie breakfast even though I did not quite wish to eat meat that morning. I just wanted a breakfast that was served relatively warm because it was pretty cold in the morning. That was my second serving of breakfast for the day.

While we were having breakfast, the tour-guide shared with us how to appreciate Vegemite, which is a spread from brewers yeast made in Australia. She suggested that if we were to have Vegemite with our bread, instead of spreading it on the bread, we should only scrap a very thin layer of it on the bread. 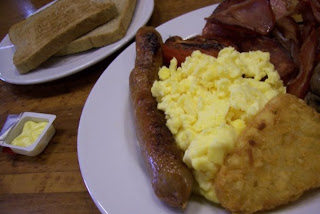 During the short chit-chats that we had during the breakfast, we found out that it happened to be one of the group members' birthday, and we sang him a birthday song after we were done with the breakfast.

I am very glad that I had went for the Backstage Tour. It was a worthwhile experience for me. To be honest, I can't exactly remember everything that the tour-guide had shared verbally with us, but the moments that I had spent on the tour remained quite vividly in my visual memory.
Posted by oceanskies79 at 10/16/2008 09:38:00 pm

indeed a good trip. to be able to see the renowned opera house at such close quarters.

Misti: Certainly. :)
I simply awed in wonder while I was onboard the backstage tour.