Hopefully this series of posts will bring back good memories to Kunstemaecker and fellow bloggers.

Thank goodness that Msfeline was around to help give ideas of the possible places that we could show Kunstemaecker to. For the rest of this post, let pictures do most of the work of telling the story. We travelled from places to places on public transport.

**
First stop was the wet market at the basement of Chinatown Complex. The best part I like about the wet market is the fragrant smells of the tropical fruits that were put on sale at the fruit stalls.

Kunstemaecker had wanted to take photo of a few of the frogs that were being put on sale (intended for consumption), but the stall-holder forbid him to do so. Did you manage to imagine a disappointed look on Kunstemaecker's face? 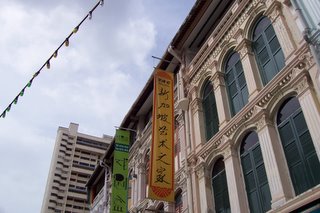 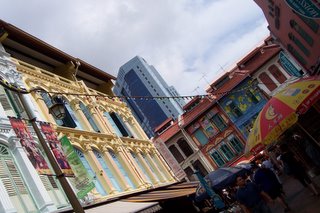 Shophouses at the Chinatown area

I must have been a big-eater where it comes to eating breakfast. I have had my breakfast before meeting Kunstemaecker but after visiting the wet market, I was hungry for more food for breakfast. Thank goodness that there were hawker stalls selling local cuisine on the second storey of the Chinatown Complex.

The weather on 28 Dec 2005 was pretty good for sightseeing.

***
Here's one of our stops for the morning: 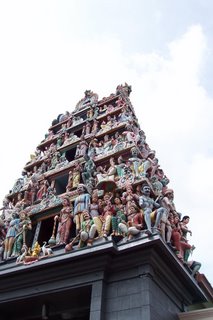 When we were at the Sri Mariamman Temple (an Indian temple), it was about 11 a.m. on a Wednesday morning. There was a kind of religious ritual going on in the Indian temple. Music was played during the ritual, and I quite like the music initially until it got overplayed. Offerings were being made to what seemed to be the statue of one of the gods. It was an eye-opener for myself. Although I have been to this temple a few times, I had yet to witness such a ritual until yesterday. It would have been better if we had a guide with us who could enlighten us with the significance of that ritual.

**
After the stop at the Indian Temple, we took a longer route to the Chinatown Heritage Centre so as to avoid a crowd of tourists.

Along the way, I saw what looked like an interesting composition. What do you think? 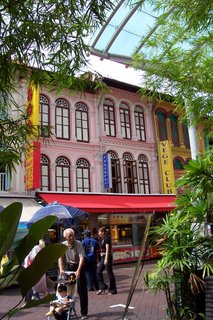 I like the contrasts in this picture. The manmade colors competing with those of nature. Also there is the young and the old. And all sheltered by the white awning and pleasant trees.