Since we were in Chinatown yesterday, one of the places that yours truly would recommend would be the Chinatown Heritage Centre. I remember being one of the first few groups of visitors to this centre when it was first opened a few years ago.

**
But now, some of the exhibits are not so easily accessible to the public as compared to when the centre was first opened. I remember that a few years ago, I was able to peep through the "peeping hole" found on a detachable tile located on the one of the rooms on the second level of the shophouses. When I peeped through the hole, I was able to see what was going on along the five-foot way (on the first level). But to be fair, I did noticed a few improvements to the centre's exhibits when I was there yesterday.
**

Located in three newly restored shophouses along Pagoda Street, the Chinatown Heritage Centre gives visitors an overview of the history of Chinatown and traces the lives of the early Chinese settlers in Singapore.

Take a peep at the replica of the cubicles to get a picture of the living conditions in these living quarters back in the 1950s:
http://www.chinatownheritage.com.sg/cubicle(m).htm

If you wonder how toilets looked like many decades ago during the times when buckets were used to collect human waste, look no further than below: 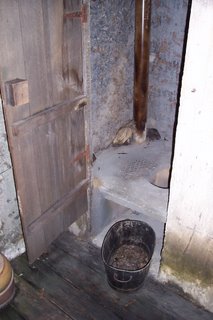 My recommendation to those of you who wishes to visit this centre: If it is your first time there, it will be good to check out the timings for the guided tours and visit the centre during those times. I have found the guided tours enriching. There is good discounts for POSB, DBS cardholders. Just bring along your ATM cards and that will do.

***
Not forgetting, here is a picture of Kunstemaecker.

***
We had lunch at Chinatown area. Msfeline has good taste and recommended a good eating place where we had you(2) ji(1) mian (soya sauce chicken noodles???). Thanks for the recommendations Msfeline.

Believing that it will be a good experience for Kunstemaecker to take the MRT train, we got him onboard one of the MRT trains from Chinatown station to Harbourfront station. We had also wanted him to catch a glimpse of the island of Sentosa.

A pity that because of the construction of the Vivo City nearby Harbourfront and the lack of viewing galleries for members of the public, we did not manage to find a suitable spot to allow Kunstemaecker to have a good view of Sentosa. We only managed to get an obstructed view of part of the island of Sentosa.

But Kunstemaecker has been a very fast learner. When we later showed him a picture of the island of Sentosa, he was able to recognise it almost instantaneously. Shouldn't we give him some rounds of applause?

***
On our way to the next destination, Geylang, I spoke briefly to Kunstemaecker about Labrador Park. Labrador Park stood on a strategic location located nearby the island now known as Sentosa, and had been used by the British to serve as one of the most important coastal defences on the southern coast of the main island of Singapore so as to defend the trading port.

***
We did not go to Labrador Park and Sentosa in the end. There are still many places that I think are worthy to visit so as to understand the history of Singapore and the various diverse cultures in Singapore. For example, the Asian Civilisation Museum, the Kranji War Memorial and so forth.

Even though Singapore is just a small island, please be reminded that there is so much to see in Singapore that a few days will simply be not enough, unless one wishes to be totally overwhelmed with visiting all the places within a very short timespan. (Another attempt *winks*.)

hahaha. i like the way you 'hint' to kracker! lol!

Thank you for the informative blog
Here Is some additional
Tauck Tours Resources with vacation ideas, and information if you or your readers are interested.Guided Tours and Vacations