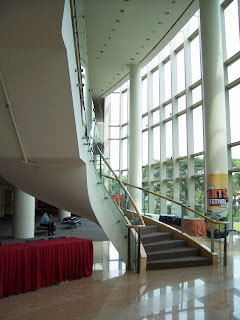 It was about 3.15 p.m., I arrived at the University Cultural Centre. Prior to that, I took a short afternoon nap at home. As a result of taking that precious nap, I had to get a taxi down to the venue for the final rehearsal and the concert. But it was worthwhile, a good rest was most needed especially after two consecutive nights of rehearsals on 14 and 15 Mar.

As I was early, I had some time to take photographs of Ng Eng Teng's Wealth and Contentment. 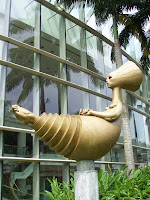 Actually the final rehearsal would only start at 4.15 p.m. I was kind of early, but I would rather be early than to risk being late. Furthermore, being quite an anxious person, I needed to create a context for myself whereby I won't have to subject myself in any panic situation. That would help me maintain a calm and composed frame of mind to play for the rehearsal and the concert.

I headed for the security check-point to collect my security pass. It was necessary to do so before I could even enter the backstage. The next thing to do was to get the key to unlock the room where my double bass (which I address affectionately as my boyfriend) so that I can tune my instrument and do some warming up.

I have not much time thereafter to take much photographs because I was busy and focused with rehearsing and playing on the double bass.

The first item we rehearsed was Brahms' Hungarian Dance, arranged by Adolf Schmid. That was our concert's encore piece for the evening and actually we only rehearsed it for the first time during our final rehearsal on 16 Mar 2007. Basically everyone was sight-reading for this piece during the rehearsal. The most important thing to do when performing this work was to watch the conductor and follow his cues. There are just too many sudden change in tempo and mood in this work that we have to be absolutely alert.

The thing about playing in an orchestra is that it is all about teamwork. If someone was careless and did not follow the cues of the conductor, the music won't sound the way the conductor intended, and then the very next thing we know: The conductor would get us to replay the entire passage again and again until he is satisfied.

It probably took us about 30 minutes to rehearse our encore piece. The next thing we did was to play selected passages from all the works that we were to perform for the concert later that night. I think it was a good idea not to rehearse all the works in their entirety during the final rehearsal. If that had happened, all of us would have been awfully tired by the start of the concert.

Most of the performers finally could have their chance to rest after we were done with rehearsing the fourth and the last movement of Beethoven's Symphony No. 6. However, the folks who were to accompany the viola soloist for his solos had to continue with the rehearsal. I am not complaining, it was actually a nice experience to accompany the soloist. I realised that music-making isn't just about the end-product. The satisfaction and the interesting part is often derived from the process of music-making.

If I were solely an audience, I tend to only hear the end-product. But as a performer playing the music, I realised that there is much sense of satisfaction in experiencing the extent that one has grown musically from Day One of the rehearsal to the eventual Concert Day. There are much things to learn through experiencing the ups and downs in the process of rehearsing for a concert: On some days, I had to rehearse some challenging parts countless times such that I would begin to doubt myself. On other days, I find a sense of achievement in being able to finally master a passage which I had once find difficult to play.

Finally, by about 6.30 p.m., the final rehearsal came to a close. I checked the tuning of my instrument once again before having my dinner. The organisers have been kind to provide us with dinner.

The one-hour between 6.30 p.m. to the start of the concert was spent by yours truly to prepare herself mentally and emotionally to play for the concert. As such, I had refrained from going anywhere out of the backstage. As much as possible, I also tried to get enough quiet time to myself to recharge and to calm the nerves. Even though it wasn't my first concert, I was still a little anxious before the start of the concert.

Before I knew it, the conductor appeared on the stage and with his cue, we started performing Rimsky-Korsakov's Russian Easter Festival Overture. By that time, I was too focused with playing to even bother about any feelings of anxiety that I had. Russian Easter Festival Overture is quite a fun piece to play. Towards the last section of the work, I could feel that there was a built-up of a celebratory mood in the air.

The next item was the viola solo. I would personally prefer Hindemith's Trauermusik for Viola and Orchestra to be at an even slower tempo but the speed at the concert was nevertheless alright. After Paganini's Grand Sonata for Viola & Orchestra, everyone gave a hearty round of applause for the soloist's rendition. I think he was the limelight for the night. To show his appreciation for the audience's support, the soloist played M. Mussorgsky's Hopak which I heard is basically a Ukraine dance. Check the following link out for more on this form of dance: Traditional Ukrainian dance "Hopak"

Then came the intermission. Even if I wish to meet up with my friends who had taken time to support the concert, I had restrictions imposed on me to refrain myself from going anyway except the backstage. By intermission, I was actually feeling a little exhausted mentally and physically, so some solitude time was necessary just before the start of the second half of the concert.

Starting the second half of the concert was Beethoven's Symphony No. 6. It wasn't perfect and there were several slips. Then again, one thing that I recommend audience to listen out for in a live-concert is not how many mistakes that the performers have made, but whether the orchestra has been successful in bringing out the "feel" of the music. I particularly like playing the fifth movement of the symphony for there were a few occasions whereby I could actually imagine myself in the arms of Nature and the open grassland.

I particularly like the triumphant last movement of Sibelius' Symphony No. 2. For some moments, I felt the music was telling me that it is possible for one to rise above the odds and emerge victorious. Of course, that come not by sheer chance, but by a whole series of attempts in overcoming the challenges. As I looked back now, I am glad that my conductor had been insistent in playing Sibelius' symphony even though it seemed at Day One that many of the orchestra players could not relate to Sibelius' music. I was one of those who just didn't have any clue how to relate to Sibelius' music back then. So now, my musical experience has been extended. Thanks to my conductor's insistence and vision.

When the audience probably thought it was the end of the concert, I saw the conductor giving the orchestra the cue to play the encore piece, Brahms' Hungarian Dance, arranged by Adolf Schmid. It proved to be an uplifting piece to conclude the concert.

But the conclusion to the concert was probably not the encore piece, it was a brief speech made by our dear Resident Conductor. It was those kind of speech that one can only make if one has been through the ups and downs of music making: There were positive moments, yet there were moments when one has to face a whole load of challenges.

Then orchestra members were asked to take photographs with our Guest-of-Honour. Here's to thank him for taking time to grace the concert.

Special thanks to the following friends for supporting the concert: JY, SH, Mystic, Msfeline and her husband (K), WL and her husband (MN), GH, QH, HY and S, Dinah. I figured that one of my friends, LP, might have came for the concert too, but I couldn't seem to be able to find her amongst the audience. Whatever it is, thank you to all of you for your support. Your support means a lot.

Before I went to pack my double bass and help with the carrying of the stools, my section of double bassists and a few other double bassists who had came to catch the concert took a group photograph together. 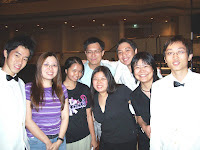 A special word of thanks to my section-mate. Despite my doubts and fears (refer to this post), I am thankful that everything went on well. Well done folks.

QH was very thoughtful and gave me a lift home on her car. I won't be able to leave that early with QH if not for my section mate XM who so kindly agreed to see to the loading and unloading of the double basses. Thank you XM.

Overall, the concert has been a success, I would think. Though the ticket sales still fell below the set benchmark, and I am not sure what consequences that the orchestra may have to face because of that. Probably the not-good-enough sales goes to show that there are still more to be done in attracting people to appreciate and support live classical music?

wish I was there :( glad you stayed cool and am sure you played well :)

I really appreciate your description of all of this. I reminesced of the old days when I was playing music. The need to please the conductor and the joy to final go beyond a difficult passage after several failed attempts.

congratulations on your successful concert. it was entertaining to read the way you write about your thoughts and feelings when you play. =)