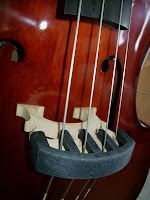 Week 11 of year 2007 was probably a week for music activities.

11 Mar 2007: Practised in the late afternoon and the night on the double bass. Time was spent practising the 4th movement and selected passages from the 5th movement of Beethoven's Symphony No. 6 The goal of the practice was to get the rhythm and intonation right. As such, I played at a pretty slow speed, and had the metronome clicking away.

I also practised Sibelius' Symphony No. 2.

12 Mar 2007: I started practising the double bass only from 10.45 p.m. It was a short one, and I ended by 11.15 p.m., I just wanted to work on improving my pitching of the various notes for the Pachelbel's Canon in D major, scored for a double bass quartet, arranged by David Heyes. That was all that I had practised for the night.

14 Mar 2007: In the late morning, I practised the difficult passages from the works to be played in the upcoming concert. You could check out this post titled The challenging passages for more details.

Later in the afternoon, before my double bass sectional with GM, I practised a bit on my own. Double bass sectional with GM was something worth waiting for. We rehearsed the third and the fourth movement of Sibelius Symphony No. 2 and the fifth movement of Beethoven's Symphony No. 6. I had a good time learning from GM. He was insistent that everyone must play together like an ensemble, and I love the insistence. Life gets extremely enriching when one meets a good teacher.

Soon after the sectional, myself and XM attended the rehearsal for the viola solos that would be performed for the upcoming concert. The conductor had wanted to rehearse the rehearsal before the soloist joined us at 7 p.m.

At about 6.40 p.m, the soloist came. He was early. Anyway, we started rehearsing Hindemith's Trauermusik. I love it.

Paganni's Grand Sonata for Viola & Orchestra sounds good too. I love the harmonics and the subdued sense of humour in the music.

Then at about 8 p.m., we had tutti rehearsals to work on Rimsky-Korsakov's Russian Easter Festival Overture, the 3rd and 4th movements from Sibelius' Symphony No. 2 in D Major, and the 4th and 5th movements from Beethoven's Symphony No. 6 in F Major. It was fun. Even though I mind the relatively loud volume of the tuba, it was nice to hear the tuba in Sibelius' Symphony No. 2. Somehow the presence of the sounds of the tuba made that symphony sound like Sibelius had intended.

15 Mar 2007, Thu: I was too tired from the previous night's rehearsal to practise in the morning.

In the night, I had orchestra rehearsal at the University Cultural Centre. We rehearsed all the works from the concert programme that very night. By the time the rehearsal ended, I was feeling dead tired.

16 Mar 2007: In the late morning, I set aside time to practise some of the more challenging passages from the third and fourth movements of Sibelius' Symphony No. 2, Rimsky-Korsakov's Russian Easter Festival Overture, Hindemith's Trauermusik and the fourth and fifth movements of Beethoven's Symphony No. 6. Instead of practising at the original tempo, I practised at a tempo about twice slower than the original tempo, just so that I can focus on rhythm and intonation.

Then in the afternoon, I continued playing on the double bass at the concert's final rehearsal. To read more about the final rehearsal and the concert itself, please refer to this post: 16 Mar 2007: Behind the scene - Sturm and Drum.

17 Mar 2007, Sat: In the early afternoon, I spent sometime practising the fourth movement of Marcello's Sonata in G major at a slow tempo. My double bass, MJ, has specifically asked that I do so.

Your persistence is admirable. Do you think this log has assisted you in maintaining your resolution?