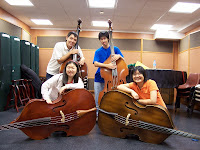 25 Feb 2007, Sun: I have probably spent at least an hour practising Faure's Sicilienne. My goal was to work through this entire work so that I can work on Sicilienne during my upcoming double bass lesson on Thursday. I am pleased to share that I have managed to do so.

There is still one section that I need further work on. There is a minor seventh leap from Eb to Db and I would need some practice to pitch that particular section in tune, while sounding musical.

I spent quite a bit of time practising a few selected passages from Rimsky-Korsakov's Russian Easter Festival Overture and the 3rd and 4th movement of Sibelius' Symphony No. 2 in D Major, Op 43. I also sight-read Paganini's Grand Sonata for Viola & Orchestra. Before I knew it, almost one hour slipped away without my realising.

The goal of the night's practice was to help me improve my rhythm for this very piece. I agree with my tutor that this 3rd movement may seem easy, but it is a very challenging movement to play and sound musically. Stopped the practice at close to 11.10 p.m. so that I can take sometime to blog.

28 Mar 2007, Wed: I did not practise on the double bass, but I attended two double bass recitals.

I felt I was making a step forward in preparing for the DipABRSM because I finally worked through the entire of Faure's Sicilienne during the lesson. My tutor demonstrated me how to playing attention to the dynamics could make the music come alive! I love it.

More practise is needed on my end.

2 Mar 2007, Fri: About 45 minutes at least on the double bass. Even though it already past 10 p.m. when I started practising, I decided to do it anyway. I practised the 2nd and the 4th movements of Marcello's Sonata in G major at a slow tempo. It proved to be quite a good workout for the night. I ended the practice earlier than I would like to because my body was sending me messages that it is getting physically tired.

3 Mar 2007, Sat: About 40 minutes on the double bass. Most of the time was spent practising the 2nd and 4th movements of Marcello's Sonata in G major at a slow tempo.

Conclusion: This week, I have reached my target of practising at least four days for the week, and at least 15 minutes per day.

Yay! Keep it happening. Discipline will perfect your music. :)

SA: Thank you for your cheers.