25 Mar 2007, Sun: In order to improve my rendition of Pachelbel's Canon in D major scored for a double bass quartet (arranged by David Heyes), I took about 20 minutes in the night to practise Canon in D major. I managed to have a better sense of how to play the last 24 bars for the first double bass.

26 Mar 2007, Mon: My parents were overseas, and I had my entire home to myself until one of my brothers returned home pretty late at night. I love the sound of peace at home. No sounds from the loud television. Somehow, the sound of peace gave me motivation to practise about an hour on the double bass, despite a very tiring day that day.

I practised all the four movements of Marcello's Sonata in G major and also spent some time playing Faure's Sicilienne. Somehow, I feel comforted by the sounds and vibrations from my double bass, affectionately referred to as my husband.

28 Mar 2007, Wed: There was no orchestra rehearsal for the evening. However, Emily, XM, QH and myself came together as a double bass quartet and played Pachelbel's Canon in D major arranged by David Heyes. With QH playing the fundamentally important bassline this evening, the ensemble sounded better than our double bass quartet rehearsal last week. I think I have rehearsed close to two hours on the double bass for the evening.

It was fun to hear at several points in the music how the various double bass parts relate to one another.

After the rehearsal, we had dinner at a nearby restaurant, Munchie Monkeys. I think Emily was looking forward to it even before the start of the rehearsal. 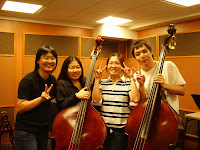 29 Mar 2007, Thu: I call Thursdays my double bass lesson day. My tutor demonstrated to me yet again how a penetrating and resonating double bass sound should sound like. I tried to imitate that sound and was only half-way close at times. Much later after the double bass lesson, I came across a blog-post titled Sound and Motion in Double Bass Playing written by Nicholas Hart. I want to achieve that lovely, resonating sound soon.

About 10 minutes of the lesson was spent on sight-reading. I still need more work on it. Does any one have tips to improve sight-reading skills?

The remaining part of the lesson was spent working on my rendition of the Marcello's Sonata in G major. I managed to play the entire sonata, but more work is needed to achieve the sound and quality of my rendition that I have aimed for. My tutor, MJ, instructed me to practise this sonata with the help of a metronome for practice purpose. I love double bass lesson because there is so much to learn.

He allowed me to use his bow to play the 2nd movement of Marcello's Sonata in G major and it felt so much easier to play with his bow. I wonder if it was his way to encourage me to consider getting a better bow? But if I were to get a better bow, the one that he had spoke to me about, that bow would cost almost as much as my current double bass, affectionately known as my husband.

30 Mar 2007, Fri: I had taken leave from work so that I could have more time to practise on the double bass. However, I did not foresee that a painful series of cramps would strike me throughout the day. My concentration level was affected when the pain got too much for myself to bear.

31 Mar 2007, Sat: The pain that had struck me on 30 Mar 2007 has subsided. Thank goodness. With relief from the pain, I was able to muster enough concentration to practise.

I practised Faure's Sicilienne and my rendition was slightly more confident that that on 30 Mar 2007. However, the critic in me expected a better rendition. This means more practice.

It pleased me that I managed to play the entire Berkeley's Introduction and Allegro although I did so section by section. At the very least, I hope I could be familiar enough with this work so that I can get my tutor's inputs to work more in depth on this during one of my double bass lessons.

To end the day's practice, I played Keyper's Romance and Rondo. I should also practise Romanace and Rondo against the metronome one day.

**
In conclusion, I have reached my target (of practising at least 4 times a week, at least 15 minutes each time) yet again this week.

I am not sure if I could reach my target next week as I have just sent my bow for rehair. I have a spare bow but I don't quite like to use that bow. Anyway, I shall hope that next week would be a productive week too.
Posted by oceanskies79 at 3/31/2007 09:27:00 pm

HI, I would like to pick up double bass, do you have any recommendation on whom I may approach for private lessons? Any idea how much lessons a month will cost?Thanks so much!
Ching Ching
impweety@gmail.com