My 15 years relationship with the double bass 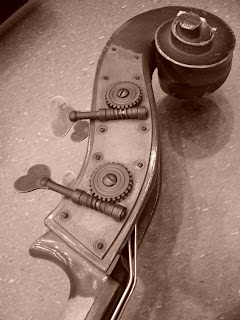 Without realising it, I have actually played the double bass for 15 years! This is worth a celebration.

I can't remember which was the exact date that I had first lay my hands on the double bass. Fifteen years ago, how would a young teenager like myself even expect that I would play this instrument and love it till today? Then how then, would I even bother at that time to take note of the date that I had started learning the double bass?

Anyway, as best as I can vaguely recall, when I was in Secondary One, I had to choose an Extra-Curricular activity. I had initially wanted to join the basketball team, but decided I didn't want to be out in the sun and I did not like competitive sports. I didn't want to march, so all the uniformed groups are out. In the end, I chose to join the Chinese Orchestra of my Secondary school as my first choice.

For some reason, I had missed the first meeting for Secondary One students who have enrolled for the Chinese Orchestra. When I turned up for the second meeting, most of the students have already chosen and decided on the instruments that they wish to play.

I ended up deciding to play the double bass. There were two main reasons:
Reason number one: The conductor was in the opinion that I have the physical built (fairly large hands and tall height) to play the double bass.
Reason number two: I learnt that it was strongly encouraged for almost everyone to buy a instrument of their choice so that they can practise more often. I wasn't prepared to buy a instrument at that time. Neither was I sure if my parents would even approve to support me financially to purchase an instrument then. As such, when I learnt that I won't be expected to purchase a double bass if I were to choose it, it became a natural and practical choice.

Starting to learn the double bass proved to be quite a challenge. Except for the very limited music lessons (once to twice a week) that I had during the six years in my primary school, I didn't have any other background to music.

Actually I knew that concept, thanks to my limited music lessons in primary school. However, I was pretty quiet when I first joined the Chinese Orchestra. For one thing, I tend to be slow to warm up. I didn't respond much even when questions were asked, so my seniors had probably misinterpret my silence as ignorance. But well, I had a good laugh and fun as they taught me music the lay-person way. 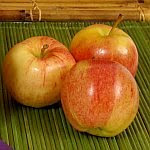 (taken from Bouquet of Fruits)

Next was reading the scores in bass clef. In order to speed up my learning, I actually took some of the scores home, and attempted to play the notes on my brother's piano. It wasn't that difficult. Then I could hear what the scores were trying to get me to play. Thanks to my limited music lessons, and what little that I had managed to make out from my brother's piano beginner's guide, I managed to figure out where the notes are on the keyboard. Then when I go back for Chinese Orchestra practice sessions, I would try to play by ear, literally.

The hardest part which I find was to learn to use the bow. I don't know how long I had taken just to be able to make an acceptable sound on the double bass using the bow. Even years later, it has taken me a lot of trials and errors, and guidance from teachers and fellow double bass players, and by observing others, in order to improve on my right-hand technique of using the bow. I am still learning.

There is something very energising about learning. For me, it is to realise that I have grown with time, and maybe without realising, I have improved, and I can perform better.

Meantime, I shall end the post here. If I should find more inspirations to continue writing about this topic, I shall write a second part to this series. I wonder if anyone likes to read more on this topic?

Anyway, with 15 years of relationship with the double bass, I am happy to share that I have improved over these years. Well, at least for those who knew me 15 years ago, they should be able to tell the difference.

Knowing that I have already 15 years of relationship with the double bass, you may better appreciate what makes the double bass have an important place in my heart and my life.
Posted by oceanskies79 at 3/12/2007 11:37:00 pm

Wow.. 15 years! That's long! I never been able to stick with anything that long! Oh.. I do have some friends for 25 years now... I think that's long enough!

Such dedication. May you continue to improve for the next 15 years.

culmination of your dedication. you wouldn't have known then that you would have gone so far with your learning of the double bass. congratulations!

Wah 15 years learning the double bass! You must know it inside out so as to manipulate it well! haha...

This post provides an interesting insight into your very private life. Rare lor. I want more!

I think u r really talented, to have started so late and yet achieve so much! :)

Hi Jane: I'm sure you have been loving food for more than 15 years?

Simple American: Thank you for your support. I appreciate it.

Misti: Thanks. I have my ups and downs.

Pinkie: Thanks for the compliments. I guess the moral of the story is that people can still achieve even if they had started out late?