Getting ready for my first major performance

Related post: My 15 years relationship with the double bass 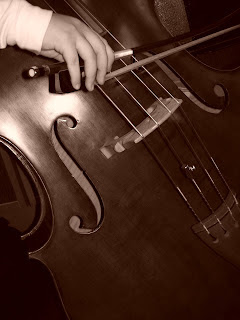 That very year, the school was staging a major cultural performance night, which I shall just simply refer to as NY Nite. NY Nite was to be held in August of that year, if my memory did not fail me. Basically, the Chinese Orchestra would present an item for this performance, and the various performing art groups of the school would also stage an item each. I can still remember that the Chinese Orchestra would perform the work titled Fei Tian for NY Nite.

In general, only members in the Chinese Orchestra who are in Secondary Two or above will get a chance to perform in NY Nite. This was probably the case so that the Secondary One students could have sufficient time to learn the basic skills of playing their instruments.

But well, the works was written to be played by more than one double bass. I learnt that even though an alumni member (who plays double bass) would join the Chinese Orchestra from June to rehearse for NY Nite, the orchestra needed more double bass players to play Fei Tian during NY Nite. Then before I was ready for anything, I had to take up the challenge of learning the double bass well enough to perform by August that year. That was about less than eight months away!

For those eight months or less to come, I was surrounded not by my peers, but by seniors because when I was able to make sound on the double bass, it was time for me to join the orchestra rehearsal for NY Nite. Most of my peers were still just trying to learn to play their instruments! I had to join both sectionals and the orchestra rehearsals.

As for why the fingerboard was only one-third the size of a regular fingerboard, welll, at least for most works performed by a student Chinese Orchestra, the double bass parts generally don't require the players to play anywhere beyond the fourth position.

So even though I didn't have my own double bass back then, I had my self-made fingerboard at home to try to practise with. At least, I could try to practise and familiarise myself with where the fingers should stop on the double bass strings. Such mental practising had helped speed up my learning.

Left hand technique was still manageable. My greatest difficulty then was really on how to use the bow and make a nice sound on the instrument. I later learnt why it might be a challenging task for me back then. The bow that I was asked to use was a German-style bow but with a considerably narrow frog, but I was taught to play using the French-bow method. It took me one entire year before a double bass outside the orchestra corrected me. Since then, I use the French-style bow using the French-bow method of hold.

Moral of the story? The school needed more financial backing to get tutors to teach the students properly. It would have been unfair to expect seniors to be the ones solely responsible to teach the younger students. 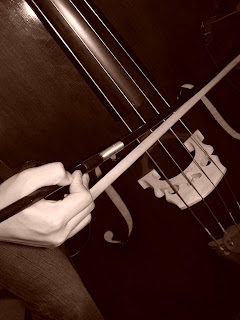 Anyway, I had pulled through. Back then, I didn't have much music background, neither have I taken music exams, piano lessons or whatsoever like some of the other members, but in the end, I had managed to be able to survive those three nights of NY Nite performances in August that very year.

Very impressive. Making your own finger board. Such a demanding introduction to the world of music.