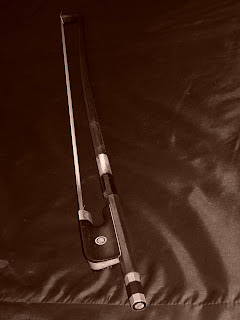 18 Mar 2007, Sun: I spent close to an hour at night to practise Pachelbel's Canon in D major scored for a double bass quartet, arranged by David Heyes. The focus was to work on the intonation and to find appropriate fingerings to play this work. I look forward to play it with other members of the double bass quartet.

22 Mar 2007, Thu: This was the day when I had double bass lesson with MJ. He spent most of the lesson to work on my rendition of the first movement of Marcello's Sonata in G major. In this lesson, he demonstrated to me the differences in sound and colour between the works from Baroque period, the Classical period, and the Romantic period. He gave me a couple of assignments to practise on. I still need to work on my vibrato technique.

23 Mar 2007, Fri: I probably have spent at least an hour 1st, 2nd and 3rd movements of Marcello's Sonata in G major. I was working on keeping time.

This was followed by my practice of Pachelbel's Canon in D major scored for a double bass quartet, arranged by David Heyes. My pitching for this piece is improving, though slightly,

24 Mar 2007, Sat: A short 20 minutes was spent practising the first half of Faure's Sicilienne. I was trying to work memorising this work so that I can one day play this work from memory.

So this is yet another week whereby I have managed to hit my target of practising at least four times per week on the double bass, at least 15 minutes for each practice-session.

Yeah, give me a high-five!

**
Yet, to be truthfully, I wished I could have more time to practise. I am quite behind the schedule that I have set for myself. I had wanted to be able to play the entire Berkeley's Introduction and Allegro and three other pieces by end of Feb 2007, but I am now still working on Marcello's Sonata in G major, and I have only managed to play one-third of Berkeley's Introduction and Allegro.

I am so happy every time I read these posts. You keep it up PY. :)

Simple American: Thank you very much for your cheers and support, and for encouraging me these 12 weeks. :)