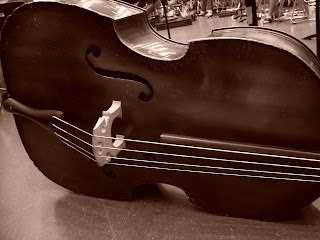 4 Mar 2007, Sun: Practised on the double bass in the morning as well as in the afternoon.

As my tutor has requested that I work on the 2nd and 4th movements of Marcello's Sonata in G major, time was put aside to work on these two movements. Some time was spent practising Faure's Sicilienne.

I also set aside time to practise Hindemith's Trauermusik for Viola and Orchestra. There are some parts for the double bass in this work that is a little challenging to sight-read. Also practised the double bass parts for Paganini's Grand Sonata for Viola & Orchestra which was relatively much easier. But I prefer playing Hindemith's Trauermusik. It sounded more dark!

6 Mar 2007, Tue: After spending about 12 hours in the office, practising on the double bass became a natural thing to do to help me find solace. I spent much of the time practising selected passages from Sibelius' Symphony No. 2, and Beethoven's Symphony No. 6. About 50 minutes on the double bass, and while my heart wanted to continue till midnight, I decided that I shall stop. My body and mind was feeling too tired, not from practising, but from the long day.

7 Mar 2007, Wed: Prior to the orchestra rehearsal, I set aside about 40 minutes to practise Pachelbel's Canon in D major, scored for a double bass quartet, arranged by David Heyes, and selected passages from the orchestral works that will be performed for the upcoming concert that I will be playing in.

For the rehearsal, we went through every single programme for the upcoming concert. Beethoven's Symphony No. 6 did not seem as daunting afterall. At least I have managed to survive after playing the very challenging 4th movement.

**
Compared to last week, I am less productive on the double bass for this week. The consoling thing is that I have nevertheless reached my target of practising at least four days a week, at least 15 minutes on each of the four days.
Posted by oceanskies79 at 3/10/2007 10:19:00 pm

I think your boyfriend is sooooo handsome! ;) I've always wanted to learn the cello (not so much double bass, since that looked a little too big for me). I wonder if it's too late now... fingers all hardened can't even play the piano decently... *sigh*

I suppose it is never too late to learn anything. Warming up helps. Getting a good tutor too will help you, and of course, regular practise.

Good to see you keeping on track :)