The festive event beside the river 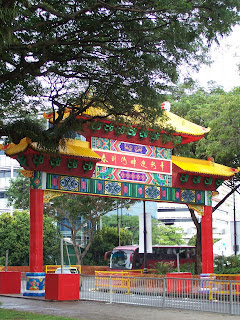 Hoping that there might be something new to learn about from the Singapore River Hong Bao, I put aside something to check it out last Saturday. This year, the event is still held at the Esplanade Park, just like last year.

When the world outside me seem to be in the joyous mood to celebrate and cheer, I was observing the world from the point of an outsider. Is it a matter of habit or tradition that people celebrate Chinese New Year? Or is it that they sincerely are happy to welcome the start of a New Year? Is it necessary to find oneself in crowds so as experience the festive mood? 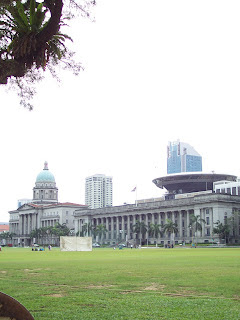 As I walked towards the centre of activities of the Singapore River Hong Bao 2007, I could not help but turn my attention to the old Supreme Court and City Hall. There is something nice about their colonial architecture. 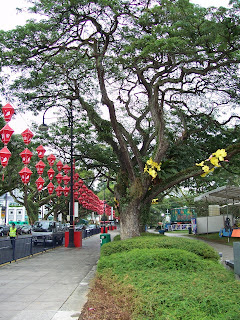 I noticed that even the trees at the Esplanade Park have been decorated with articial flowers for the Singapore River Hong Bao 2007. At the back of my mind, I wondered if the trees enjoyed their new look or hated being dolled up against their wishes. 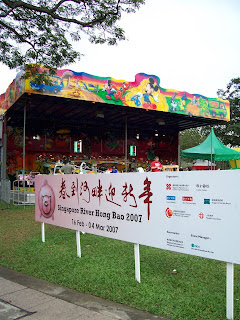 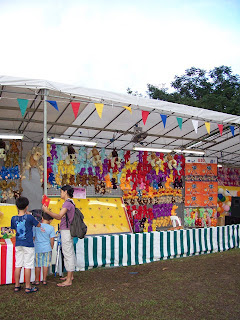 I noticed that there were games stalls and a mini-carnival with bumper-cars activities for those who are at the Singapore River Hong Bao 2007. These things might have appealed to me when I was very much younger, but I had no mood for any of those last Saturday.

Instead, my ears were attracted to the rhythms from the drums. Maybe the drummer in Simple American would love this part of the Singapore River Hong Bao? 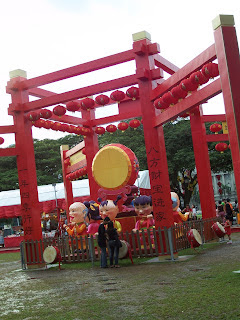 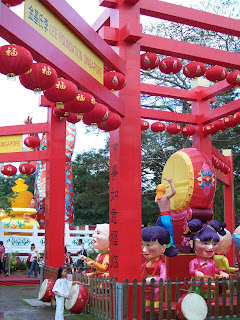 At the Cultural Village, there was an exhibition about the customs and traditions for Lunar New Year. It included a section on how the various Chinese dialect groups celebrate the Lunar New Year. With too much crowd and limited walking space, I decided it was not worth my time to read every single exhibition panel. 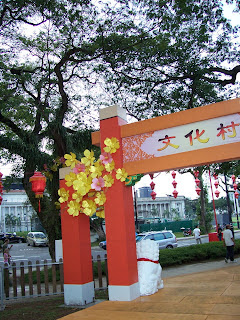 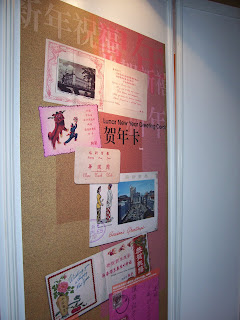 Greeting cards from the past.

Actually, it seemed to me that nothing has changed much except for the location of the various artefacts. The exhibition at the Cultural Village did not appeal too much to me, but I found it interesting to read about the various emperors of the Qing Dynasty of China. The section on the emperors of the Qing Dynasty can be found in the pagoda-like structure below. I like the dragon-like ornaments. 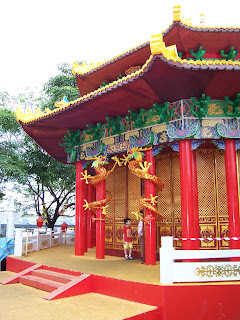 Nearby, I saw people throwing coins at the cards hanging from the golden tree. Some of the cards contain words such as "good luck" etc. All proceeds from the coin-throwing activity will go to charity. 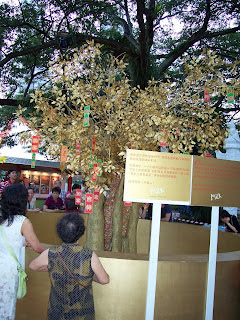 Of worthy mention is the structure that you would see in the photo below. It would be hard to miss it since it is the tallest structure at this Singapore River Hong Bao 2007 event. 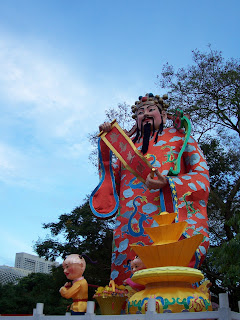 Since this year is the Year of the Pig, it would be impossible not to find lovable-looking statues of pigs at the event. 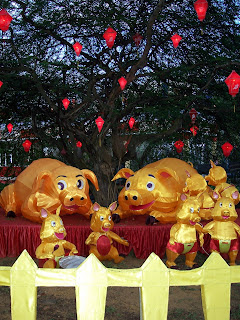 Well, I could hardly see any beautiful scenery of the river, even though the Singapore River Hong Bao event was technically held fairly near the mouth of Singapore River.

Before I know it, tomorrow would be the last day of the Lunar New Year! No pretentious festive mood here. Lunar New Year just felt like any other day to me.


***
Other folks have also written about the Singapore River Hong Bao 2007, check them out:

I would love to hear those drums!

That whole affair looks quite wonderful.